How to use the Claim Final Tab Attachment Details Feature for PWK, EOB, COB or MSP

How to use the Claim Final Tab Attachment Details Feature for PWK, EOB, COB or MSP

You can now fax or mail your EOB or other documents and send details in your claim so the payer will match up your claim and documentation as received.


Just add information to the document and the payer will link the document(s) with your claim submission.


Here are the steps to accomplish this task.


When releasing a claim that needs an attachment(s) sent to the payer, follow these steps:


From the Claim Final Tab > Select the Attachment Report Type Code EB from the drop-down menu >  Select a Transmission Code (Fax or Mail) > Enter an Attachment Control # This is a unique number assigned by the biller to uniquely identify the attachment and will also need to be added to each page of the document that is being faxed or mailed. Claim id# is recommended. The claim must be released first, to generate the claim id.
After the claim has been released/saved, return to Claim General and Show Last. Search the Patient Transaction History locate the claim id number. The released claim can also be located in the Awaiting Claim File Creation or Pending Paper Payer buckets on the Today screen. Once the claim id number has been entered in the Attachment Control # field on the Claim Final screen, release the claim again to save it with the attachment details. Claim file generates overnight and will include the most recent version of the claim released. 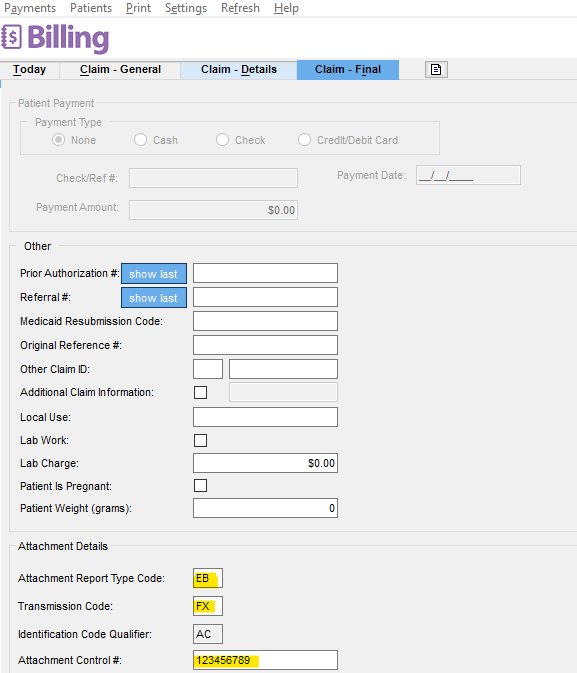 When the claim is released this information will be part of the EDI or paper claim. Then you mail or fax your EOB and the payer will match the claim to the document.